The fumigation fan is used for native American shamanic ritual for purification or care,

It is used for purification rituals as much to purify people as to purify one's home.

The fan in the shamanic tradition to "magic powers" connected to the spiritual animal during its creation, they are also called animal totem

The purification fans are made with various shamanic symbols including the doctor symbol, which is also called the eye of man medicine,

With practice, the shamanic spirit will infuse you.

How do I use sage?

-burn the white sage, then direct the smoke to the person or place you need to purify,

Sort by:
Best sellers Relevance Name, A to Z Name, Z to A Price, low to high Price, high to low
Showing 1-1 of 1 item(s) 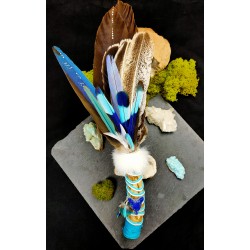