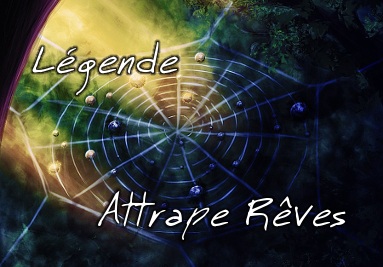 (it is important to note, that according to Native American culture the dream is the vehicle that allows the exchange between men and the great spirit.)

Sorting out good and bad dreams

The Native Americans of the North seek to preserve the child, from birth, from the evil spirits present in the nightmares. The original function of the Native American Dream Catcher is to dreamcatcher that float in the night air and sort them into good and bad dreams. This dream "net" was mainly attached to the handle of the baby carrier, which also served as the cradle for the North American "papoose" with its umbilical cord dried in a small bag of shells and other charms designed to ward off evil spirits.

Origin of the Dream Catcher

The origin would be Ojibwasor Ojibeways (Ojiboués)or Saulteux who, like the Chippewas,belong to the same Algonquin-speaking tribe (Catlin-Matthiessen, 1989) which was still, along with the Navajos, in 1972, one of the most important tribes located in northern Mexico. Their descendants still live around the Great Lakes, as far as Winnepeg Lake and along the Ottawa River (Ontario in Canada, Wisconsin and Minnesota in the United States). Several legends argue over the origin of the dream catcher. They have one thing in common: weaving a spider's web.

Legend Ojibwa says thatAsibikaashi(The Spider Mother) caught the rays of the sun (giizis)in her web before dawn. When the nation dispersed, it could not weave, for each tribe, the necessary canvases because the sun did not rising at the same time on these immense territories. So she taught women the art of the transportable net to catch the light wherever it is and thus drive out night terrors. Thus were born the wicker hoops of the marshes and woods with the mesh in plant or animal ropes that they fixed on the baby carriers who never left them so that they would bring light and warmth to all. From the original sun catchers, the small feathered hoops became objects of conspiracy to destroy nightmares at sunrise.

In the country Lakota (Sioux), a very old sachem had a vision at the top of a sacred mountain. Iktomi,the Great Prankster, manifested himself in the form of a spider that weaded its web in its headgear made of eagle feathers, horsehair, wooden beads and various amulets. With his woven canvas,Iktomi handed him his modified headgear, reminding him that the canvas should always marry the sacred circle and have a hole in its middle. This magical object would allow the old sage to his own the right direction thanks to the visions retained by the spider web in their dreams. Back in his tribe, the old sachem shared his vision and his family hung up on their tepees night and day, replicas of his sacred hairstyle to better govern their lives, and attached dream catchers with feathers to their hair mats to have visions.

symbolic elements of the dream catcher

The circle is one of the essential and universal symbolic elements of northern Native American culture. The dream catcher takes the form of the Sacred Circle as well as the medicine wheel, the ritual drum, the base of the tepee/wigwametc. The hoop of the dream catcher represents for one half the race of the sun in the sky and for the other that of the moon; thus, the complementary day and night are reconciled in the dream catcher. Its circular shape makes it an intermediate object not only with the spirit world but also with the nature from which it originates. It is the vehicle of visions that every Native American must discover in his life that will lead him to his raison d'être.

The spider web does not have the negative, even evil, connotation of our Western representations. Among the North Indians, the spider belongs to the world of the night not to frighten but to perform an eminently positive function of pest destroyer in the own and figurative. The father, mother or grandmother spider are mythological figures widespread in North America and play a prominent role in the creation of the world. The spider most often embodies the civilizing figure, bringing fire to men for example or metaphorically, in the case of the dream catcher, bringing daylight. The spider, a multifaceted being that adapts, is the symbol of the life that must be assumed, as one weaves one's web of life and its destiny. Having eight legs brings it closer to infinity and also to the eight Indian cardinal points. Its canvas indicates the directions to follow according to the cardinal points and the winds.

For the Native Americans of the North, the universe is alive and everything has a movement in power and the breath of life. Feathers are symbols of lightness, calmness, breathing and air. The breath is identified with the spirit and by extension with the divine presence or that of the ancestors. For native Americans, feathers are charged with energy, protective and powerful, in the immediate vicinity of the head and heart of the warrior or sage, they animate the hairstyles and adornments.

Beyond its mere function as guardian of the child's sleep, the dream has conditioned and still conditions many aspects of the life of the Native American tribes of the North and constitutes a cultural common point. "The existence of continuity between nightlife and daytime praxishas long been highlighted by ethnologists [.] the accounts of the first Jesuit missionaries among the Iroquois knew noted that the most important affairs of life were settled from their dreams." (Bastide Roger, 1975). As Frances Densmore (1929, p.78) points out, for these peoples without writing, dreams brought wisdom and knowledge. They tested their dreams in everyday life and thus became aware of their own strength.

In adults, the dream catcher serves as an outlet for worries and bad thoughts. It is also widely used to stimulate visionary ability. We have a device made up of a miniature dream catcher (circa 1900) attached to a set of feathers. This device was attached to the warriors' hair mat

Through practice and with the help of spirits we have learned a little more about this sacred object.

It seems related to spider medicine

The Spirits of our animal brothers have been able to remain on the ground with the natural forces. When he is sick, elk knows what grass to eat to heal itself. It is his Spirits that must be invoked in order to obtain good medicine.

Iktomi, the Spider Spirit, who undoes what is woven too thin for man to get rid of. It also treats agitation in unstable children. It's Spider Medicine. by Wallace Black Elk

"It acts on the coronal and frees bad thoughts"

One could say that the dream catch is a kind of sleep therapy, coupled with some kind of protection.

Untied what is buried and bring it to the level of the conscious, that's what I have noticed, in the people who use it.

The dream is like directed, do not forget that it is a sacred object.

The size, shape, and different weavings, must have a definite impact but on which we have no more information.

Since everything is transmitted orally and often these kinds of sacred objects are obtained during rite, it is difficult to have the ins and outs.
Example the rite of the quest for vision that is called in Lakota: Hanblecheyapi is a very dangerous rite where one approaches the limits of death, 4 days without drinking or eating: messages are transmitted during these quests where for example the rite of the Inipi (purification) which is also a lodge that serves to communicate with the Spirits and many other things (Great Spirit)

Most of you, must know the meaning of catching dreams, that according to Native American legend, it catches the bad dreams, which come to imprison themselves in the canvas until dawn, and are destroyed speaks sun rays then.

I would just like to add something about it; we should not expect to stop having bad dreams, because it is not really the bad dreams that he holds back, but the negative energies, by which I mean either the deceased who have not found the rest that feed on our energies (agitations at night, great fatigue ...) or malicious entities that feed on our fears.

Nightmares, are not always interpreted as they should, they are sometimes necessary to show you or make you understand something, and can reveal things that you do not know about yourself.

Thus our dreams are purified and consecrated with a purpose of protection against negative energies.